Today we toured Jaipur- also known as the pink city, starting with what our tour guide says is one of the most photographed buildings in India — the Hawa Mahal, or “wind palace”.  The view from the street is actually the back of the palace. The structure contains over 900 little windows that can be opened to help cool the building and allowed the ladies to view the king as he entered or left the city.  We’re told that when the wind blows it makes audible tones.  It’d be interesting to hear, but today was not windy. 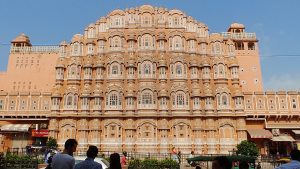 Outside the wind palace was a snake charmer.  Yeah, it’s a real thing, and the cobra in the basket was very real.  It’s supposed to be illegal, but the police force doesn’t have the manpower to enforce the law, so it happens anyway. 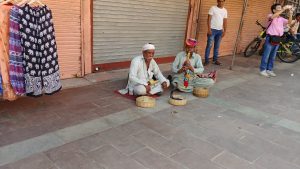 Our next stop was Amer Fort. Since the complex is at the top of a hill, the first thing we did was ride an elephant up the long, winding road to the palace complex. We’re told that the elephants they use are from a sanctuary where they keep and care for them humanely. They have a veterinarian on staff to oversee their health, and they only let the rides take place during the morning while the pavement is cool.  Once the temperature warms up, they take the elephants back to the sanctuary so they don’t burn their feet.  We didn’t visit the sanctuary, but we can confirm that the elephants were gone before noon. 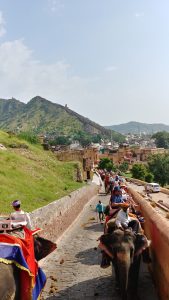 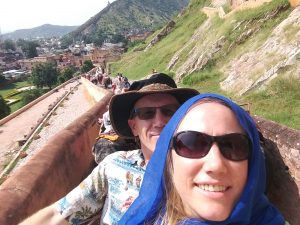 I don’t know what can be said about the palace itself. Like many of the others, it is impressively large, with ornate craftsmanship.  The view of the surrounding valleys and city is impressive.  Surrounding the whole complex is a large wall that runs up and down the ridges of the surrounding hills.  In all, the perimeter wall is 12 km long. It would make for a fun day hike, but they don’t let people out on it because it is not in good repair. 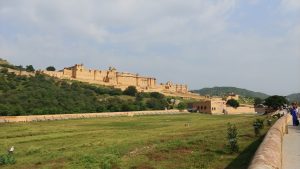 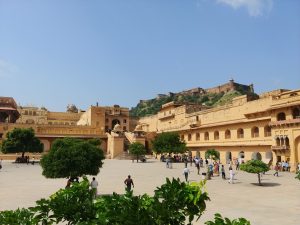 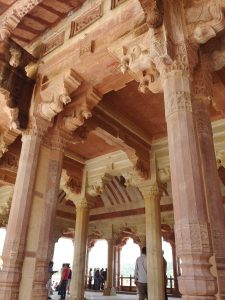 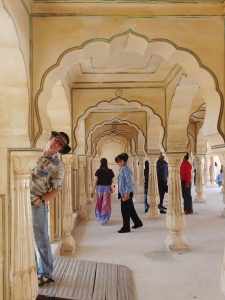 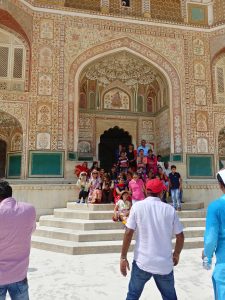 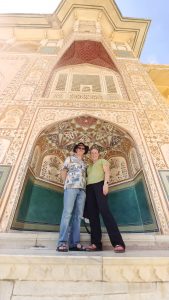 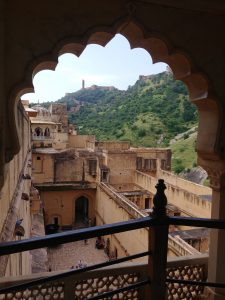 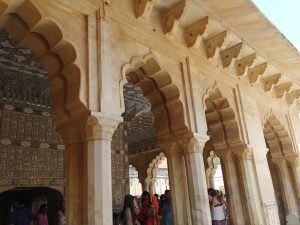 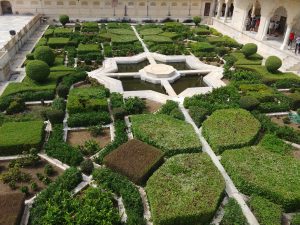 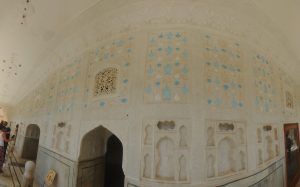 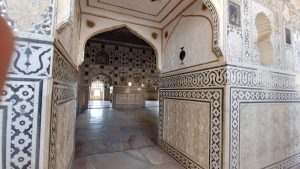 The palace sits atop a large lake that is now mostly dry because a dam was built upstream.  The gardens that are in the middle of the lake would be very pretty with water around them. 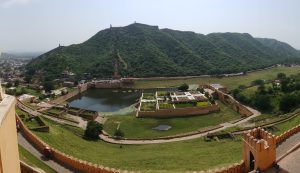 Following the Amber palace we stopped by Jal Mahal, the water palace. A palace built in the middle of a lake, it consists of three stories, the lowest of which is underwater.  They don’t allow you to go out to it, so you have to just look at it from the shore. One of the impressive things about the water palace is the gardens on the top. There are full-size trees up there, which is remarkable considering that they’re growing on top of a building. 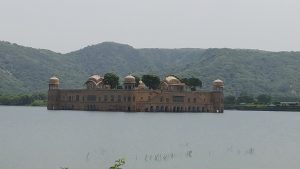 After the water palace we stopped by a textile factory and saw how they make block-printed fabric. Dawnetta even got to try it out and stamped an elephant design. We then purchased some items from the factory. 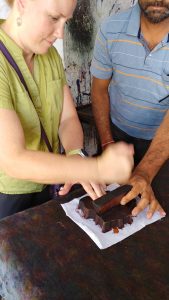 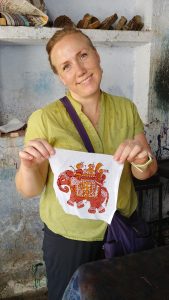 Lunch followed, then more touring. The first stop was Jantar Mantar, a remarkable installation known simply as “the solar observatory”. Apparently one of the kings was an intelligent man that was into astronomy. He built several instruments to measure time and the position of several celestial objects. Considering that these instruments were built in the 1700’s, they are amazing.  For instance, they have a sundial that is accurate to 20 seconds. Unbelievable. 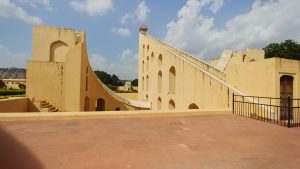 After the observatory, we were going to stop by the city palace, but decided against it due to fees. It would have been the equivalent to touring the White House (royals still live there), but neither of us were really interested.  Pictures are good enough for us. 🙂

The next stop was at the crematory grounds for the local kings.  It was a quiet area, with no tourists or traffic (just monkeys- and these were the nicer white faced monkeys that didn’t want to attack you if you looked them in the eyes). 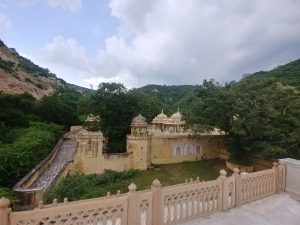 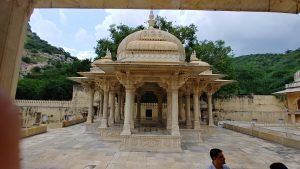 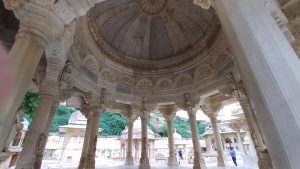 The final stop for the day was a gem producer. Jaipur is known as the gem center for India. We saw how they make various semiprecious and precious stone beads. It was an interesting process.

By this point we were worn out and called it a day and headed for our hotel.  Tonight we’re staying in an old haveli that has been converted to a hotel.  It’s the first place we’ve stayed that uses a traditional Indian door — split up the middle and held by a padlock on the outside. 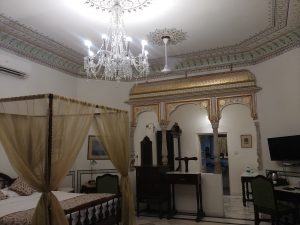 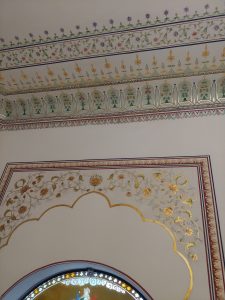 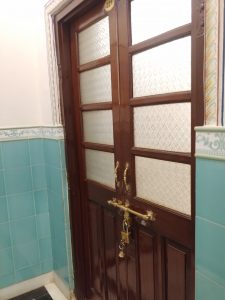 Tomorrow we go to Fort Barli.  More then!